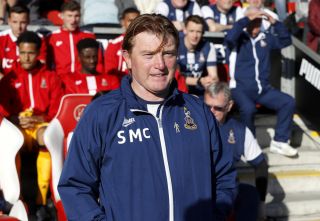 Bradford have complained to the Football Association over taunts mocking the 1985 Valley Parade fire tragedy during Saturday’s League Two game at Newport.

The Welsh club have apologised to Bradford and Bantams manager Stuart McCall, who was part of the Yorkshire club’s squad when the fire claimed 56 lives in May 1985.

McCall, whose father was among the hundreds injured in the fire, was approached at the weekend by a supporter, carrying a Leeds flag, and understood to have been verbally abused.

The former Scotland midfielder said the taunts were the “vilest thing” he has ever heard at a football match.

📜 CLUB STATEMENT | We have today lodged a formal complaint to The @FA over offensive chanting and abusive language heard during Saturday’s @SkyBetLeagueTwo game against @NewportCounty.— Bradford City AFC (@officialbantams) February 25, 2020

Bradford director of communications Ryan Sparks told the Bantams website: “We are absolutely disgusted by what our manager and club were subjected to on Saturday afternoon.

“Such repulsive chanting should not be tolerated by anyone and we have made our position clear to the FA.

“The Valley Parade Fire Disaster was without a doubt the darkest day in our club’s proud, 117-year history.

“We were astounded to witness the tragedy – which continues to cause anguish to hundreds of people – being mocked, with stewards in close proximity appearing to leave the incident unchallenged.

“We would like to take this opportunity, however, to thank Newport County for their response over the past 24 hours.

“Newport officials have informed us that Gwent Police are now conducting an investigation into the incident which, as a club, we welcome.”

The two clubs say they are working closely to identify those involved and ensure appropriate action is taken against them.

A Newport statement said: “NCAFC would like to apologise unreservedly to Bradford City AFC and more so Stuart McCall for the unsavoury actions towards Stuart at Rodney Parade on Saturday 22nd February during our Sky Bet League Two match.

“These actions have no place in society, let alone in our football club and chairman Gavin Foxall has been in dialogue with Bradford officials and spoken personally to manager Stuart McCall to offer an apology on behalf the club.

“The club acted swiftly (on Monday), working with stakeholders and authorities to identify those involved. Over the coming days we will be taking appropriate action against those identified.

“NCAFC welcomes Bradford’s decision to report the incident to the FA, and will work with all parties in order to completely stamp this kind of abhorrent behaviour from Newport County AFC and moreover football as a sport.

“NCAFC would like to reiterate our no tolerance stance on discriminatory behaviour and assure our supporters that we will continue to create an inclusive and welcoming environment for all.

“On behalf of everyone connected with the club we would again like to extend our most sincere apologies to all at Bradford City.”