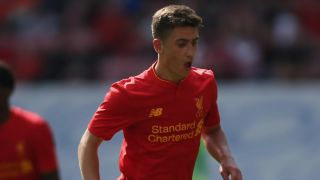 Liverpool midfielder Cameron Brannagan is open to a loan move to the Championship to boost his chances of a successful career at Anfield.

Brannagan is expected to leave on loan before the start of the Premier League season, with numerous clubs reportedly interested in his services.

The 20-year-old, who came through the club's youth academy, has made three senior league appearances, but knows a move to a lower level could be best.

"I can see the benefits of a loan," Brannagan told the Liverpool Echo.

"If I'm not going to get regular game time here, I'd love the experience of what it's like because that's something I've not done before.

"It would be good for me as a young lad to experience men's football on a regular basis so I'd like to do it soon."

Brannagan said the step up to Premier League football was difficult and feels the Championship may be the right place for his development.

He said: "It's a big jump from playing in the under-21s to the Premier League with how quick the tempo is.

"Going out on loan, playing Championship football against men would be good experience for me. I'd like to do that.

"We'll see what the manager wants to do with me. It's still early days. [Liverpool manager] Jurgen [Klopp] will come and speak to me about that when he feels it's the right time."