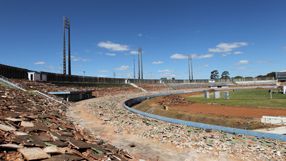 "We have all the technical attributes and we are meeting all of FIFA's demands," said Federal District governor Rogerio Rosso on his administration's website.

"We are going to keep working to bring the opening of the tournament to Brasilia."

"Regarding the selection of the opening match venue, we certainly appreciate your concerns," it said. "Please be assured that no final decisions have been taken.

"It is worth clarifying, however, that the decision of the opening match venue will ultimately be taken by the local organising committee (LOC).

"We are confident that all key considerations will be factored before a final decision is reached."

The Brazilian capital will stage its matches at a remodelled version of the Mane Garrincha stadium, with a capacity of 70,000.

Brasilia is sometimes used to host international matches but is something of a backwater in football terms and the city does not currently have a team in the Brazilian first division.

Confusion has surrounded Sao Paulo's participation in the World Cup since June when the LOC dropped plans to use the Morumbi stadium after the city failed to provide financial guarantees for the cost of its renovation.

Since then, hopes have been pinned on the planned new Corinthians stadium in the sprawling eastern suburbs of the city. The club, one of the biggest in Brazil, announced in September that it would build a 48,000 capacity-stadium.

However, FIFA demands a capacity of at least 65,000 for a stadium to stage the opening World Cup match, which would increase the cost and has become the subject of negotiations between the club and organising committee.

Another worry is that Corinthians have said their stadium would only be finished by the end of 2013 - too late for the Confederations Cup which is held one year before the World Cup and is used as a dress rehearsal.

Brazil was elected unopposed in 2007 to host the tournament earmarked for South America by FIFA under a short-lived rotation system which also took this year's World Cup to Africa.

The country faces a huge job to improve its creaking stadiums and transport system while urban violence and social problems are also concerns.

At least 30 people have been killed in the last five days in Rio de Janeiro in battles between police and slum-based drug gangs.

This month's Brazilian Grand Prix in Sao Paulo was marred by attempted armed attacks on world champion Jenson Button and a group of team engineers.