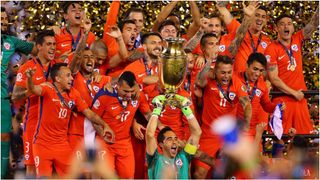 Brazil and Argentina successfully avoided Chile in the draw for the group stage of the 2019 Copa America.

Hosts Brazil have been placed in Group A, where they will face Bolivia, Venezuela and Peru.

Argentina landed in Group B with Colombia and Paraguay, as well as World Cup hosts Qatar, who have been invited to take part for the first time.

Qatar's fellow guests Japan are in Group C alongside Ecuador, Uruguay and Chile, who are seeking a third consecutive triumph having beaten Argentina in the last two finals.

The 2019 tournament is set to run from June 14 to July 4, with Brazil trying to regain the Copa America crown they last won in the 2007 edition.

But it is unclear whether Lionel Messi will be part of the Argentina squad as he has not featured for his country since last year's World Cup.