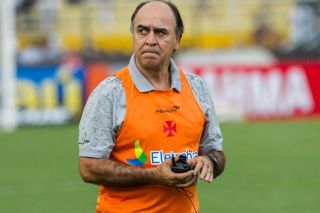 In what was expected to be a close match, defender Leo opened the scoring for Cruzeiro in the 11th minute against the fourth-placed Vitoria, establishing a single goal lead that was the margin at half-time.

Mayke put the second goal past Vitoria goalkeeper Wilson in the 59th minute before substitute attacker Dinei pulled a goal back from the spot for the visitors on 69 minutes.

But the fightback was short-lived as Borges, Ricardo Goulart and Vinicius Araujo all scored within 11 minutes to complete the crushing victory for Marco Oliveira's men.

Botafogo also picked up three points as they triumphed 3-1 at lowly Portuguesa.

After a scoreless first half, Dutch veteran Clarence Seedorf laid on an assist for Bolivar's 66th-minute opener, but Portuguesa defender Luis Ricardo cancelled out that effort five minutes later.

But Botafogo quickly turned the game back in their favour with goals to Rafael Marques and Elias in the 72nd and 77th minutes respectively sealing the win.

Sao Paulo missed an 88th-minute penalty as their horrible season continued with a 0-0 draw at Flamengo.

Atletico PR were setback by a goal on the stroke of half-time but recovered to defeat Criciuma 2-1.

Sueliton gave Criciuma the unlikely lead but a penalty by Paulo Baier and 73rd-minute winner to Ederson wrapped up the victory for Atletico PR.

Goias secured a 1-0 away victory against Ponte Preta with Walter scoring the game's only goal in the 18th minute.

In other results, Fluminense defeated Nautico 1-0, Santos could only draw 0-0 against 10-man Bahia and Atletico Mineiro finished with nine men as they ground out a goalless draw with Internacional.