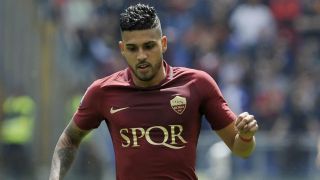 Chelsea have announced the arrival of Brazilian full-back Emerson Palmieri from Roma.

Emerson, who is still working his way back to full fitness after a serious knee injury, is believed to have cost an initial £17.5million and has signed a four-and-a-half-year contract.

The 23-year-old will provide competition for incumbent left-back Marcus Alonso following a move that was facilitated by Kenedy's loan exit to Newcastle United.

Negotiations over a potential double-signing involving Roma striker Edin Dzeko stalled and Chelsea had to settle for a deal that does not include the former Manchester City target man.

Emerson, who began his career at Santos in Brazil, arrived in Serie A on loan at Palermo in August 2014. He joined Roma the following season but was only signed permanently in December 2016.

"I came here because it’s a great team with a great history," the defender told the club's official website. "Today I am realising one of my dreams to pull on the shirt of such a great club.

"English football is something I have been watching since I was 15 years old. It is a really beautiful game over here but it is going to be even more beautiful to play it."

Chelsea director Marina Granovskaia added: "We are delighted to welcome Emerson to the club. He is a young and talented player who strengthens the squad and will provide excellent competition for places as we pursue success in three different competitions."