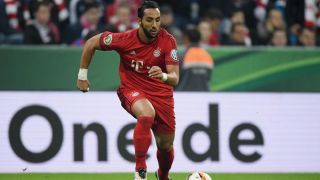 Juventus have announced the signing of defender Medhi Benatia from Bayern Munich.

The Morocco international has joined the Serie A champions on an initial season-long loan deal for €3million.

Juve will have the option to make the move permanent for an additional €17m fee in 2017.

"Juventus Football Club can this evening confirm that Medhi Benatia has joined the club on a season-long loan deal from Bayern Munich for a fee of €3m, to be paid at the international transfer release," a club statement confirmed.

"The agreement also provides Juventus with the option to purchase the defender on a permanent basis for a price of €17m, to be paid over two financial years. This option must be exercised before May 30 2017."

Benatia, 29, left Roma for Bayern in 2014 for €28m but struggled for consistency under Pep Guardiola, making just 11 starts in the Bundesliga last season.

His signing follows the departure of Uruguayan Martin Caceres, who left Juve at the end of his contract, although it has done little to calm the rumours in England concerning Leonardo Bonucci's potential transfer to Manchester City.