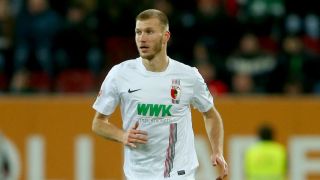 Liverpool have completed the signing of Augsburg defender Ragnar Klavan on a long-term contract.

Reds manager Jurgen Klopp was keen to bolster his centre-back options having released Kolo Toure and sold Martin Skrtel to Fenerbahce, while Mamadou Sakho and Joe Gomez are both injured.

Klavan has now arrived on a reported £4.2million fee and provides competition for Joel Matip - signed on a free transfer from Schalke - and Dejan Lovren.

"I'm really honoured to be part of this amazing club, this amazing team," he told Liverpool's official website.

"It's hard to put it into words, because it's been a dream of mine for 22 years to come to the Premier League and be a part of this amazing club, Liverpool.

"The Premier League is the most attractive league in the world and you always have amazing players here. This is the home of football."

Klavan has made over 100 international appearances for Estonia and was a member of the AZ side that won the Eredivisie title in the 2008-09 season.

He joined Augsburg ahead of the 2012-13 season and has made 125 Bundesliga appearances for the club.