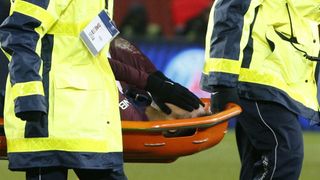 Unai Emery has dismissed reports Neymar is due to have surgery on his fractured foot that would keep him out until May.

The Brazilian star was forced off the Parc des Princes pitch in tears on Sunday after suffering the injury in an innocuous-looking incident.

PSG won the match 3-0, but Neymar's injury marred the contest, as he rode a challenge from Bouna Sarr and twisted his ankle upon contact with the turf, while also suffering a hairline fracture to his foot.

It had been reported by numerous news outlets that Neymar had decided to have surgery in order to completely solve the problem and minimise the risk of the injury impacting his World Cup.

Those reports claimed the surgery would keep Neymar out for most of the rest of the season, suggesting he could return no earlier than May.

However, Emery addressed the situation during his pre-match news conference ahead of Wednesday's Coupe de France clash with Marseille.

He said: "Neymar's not going to get surgery. That's not true."