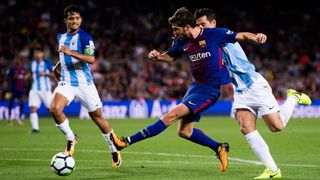 Sergi Roberto has signed a contract extension which will keep him at Barcelona until 2022, the Catalan giants have announced.

The converted right-back – who initially started his career as a central midfielder – came through the youth ranks at Barca following his signing as a 14-year-old and has gone on to defy his doubters.

Roberto seemed to struggle with the weight of expectation during his early days in the Barca first-team squad and he rarely looked like becoming anything more than a rotation option.

But, following the departure of Dani Alves, Roberto has established himself as one of LaLiga's most impressive right-backs and he continues to be first choice despite the purchases of Nelson Semedo and Aleix Vidal, who appears set for the exit door this month.