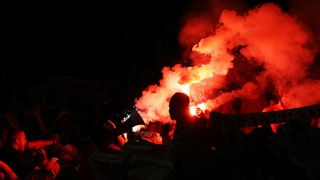 UEFA has opened disciplinary proceedings against Cologne and Arsenal following crowd disturbances prior to the Europa League clash at the Emirates Stadium on Thursday.

An estimated 20,000 Cologne fans made the trip to London from Germany for the club's first European match in 25 years, despite only 3,000 of them having tickets, an allocation set in line with UEFA rules.

Crowd congestion around the Emirates due to the number of visiting fans resulted in the kick-off being delayed by an hour, the group-stage clash eventually starting at 21:05 BST.

Some away supporters are thought to have climbed over barriers once inside the stadium in order to get into the home supporters' section, meaning segregation between the groups became impossible for stewards.

Arsenal released a statement on Friday revealing that they intend to investigate how so many Cologne fans managed to get into the stadium.

And UEFA has also taken action, revealing the German club face charges for four offences relating to crowd disturbances, setting off fireworks, the throwing of objects and acts of damage.

Arsenal will also have to answer a single indictment of blocked stairways in the away section.

UEFA's Control, Ethics and Disciplinary Body will rule on both cases on September 21.