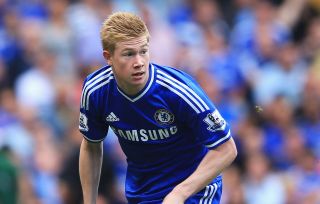 The 22-year-old spent last season on loan at the Weserstadion, scoring 10 goals in 33 Bundesliga appearances, before heading back to Stamford Bridge.

Jose Mourinho was determined to keep De Bruyne over the close-season, amid interest from Borussia Dortmund and Bayer Leverkusen, and started the midfielder in Chelsea's opening two games of the Premier League campaign.

However, the Belgian has since struggled to maintain his spot in Mourinho's plans and the Portuguese revealed on Monday that the former Genk man has been forced to train with the club's reserves after a string of unsatisfactory performances in training.

And Bremen could be set to pounce, with general manager Thomas Eichin believing the Bundesliga side are in the best position to seal a deal for De Bruyne.

"If Kevin is dissatisfied, we are happy to be the first contact," he told BILD .

"I have contact with the consultant and am informed about Kevin's situation at Chelsea.

"I know Kevin. If he doesn't play, it's certainly a big problem for him.

"We have to wait and see what happens in the winter. We will be present if there is a way to get him."