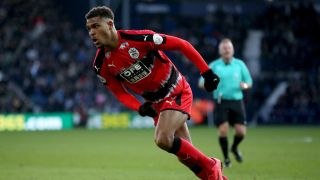 Steve Mounie ended Huddersfield Town's Premier League goal drought, but they were unable to finish off 10-man Brighton and Hove Albion, having to settle for a 1-1 draw at the Amex Stadium.

Huddersfield notched for the first time since a 2-1 win over bottom side West Brom on February 24, Mounie pouncing on an error from Shane Duffy to end his team's barren run at 427 minutes, but they could not get a second after Davy Propper's 74th-minute red card.

The Benin forward benefited from a gift from Duffy, whose misjudged backpass to Mat Ryan enabled him to slot in his third goal against Brighton this season.

Mounie's strike restored parity after Jonas Lossl inadvertently turned a shot from Solly March into his own net following an unlucky bounce off the post in the 29th minute.

Huddersfield barely threatened in the second half, though, with Lewis Dunk and Dale Stephens unable to take chances to get Brighton back in front.

The Seagulls had to cling on for a point after referee Anthony Taylor dismissed Propper for a late tackle on Jonathan Hogg, with a point doing little to significantly boost either side's survival hopes.

Steve Mounié rolling in the equaliser for (CL) April 7, 2018

Brighton should have led after 25 seconds when Ezequiel Schelotto played Propper in behind, but the Netherlands international missed the target under pressure from Florent Hadergjonaj.

The action continued at a frantic pace with Mounie volleying straight at Ryan before Lossl raced off his line to stop Jose Izquierdo slotting Glenn Murray's throughball home in the 13th minute.

Lossl was soon cursing his luck, though. The Dane did well to push March's 20-yard shot against the upright, but an unfortunate ricochet saw it bounce onto him and cross the line.

Brighton returned the favour in the 33rd minute when Duffy's blind backpass was intercepted by Mounie, who rounded Ryan and stayed on his feet to slot in the equaliser.

Dunk failed to hit the target with a free header inside the six-yard box eight minutes after the restart, while a curling 20-yard strike from Stephens was tipped over by Lossl.

Huddersfield's chances were boosted when Propper saw red for a lunge on Hogg that resulted in the visiting captain being replaced 10 minutes from time.

However, it was Brighton who had the best opportunity to win it. Substitute Leonardo Ulloa fed Izquierdo, but his poor first touch hit the onrushing Lossl and the chance went begging.