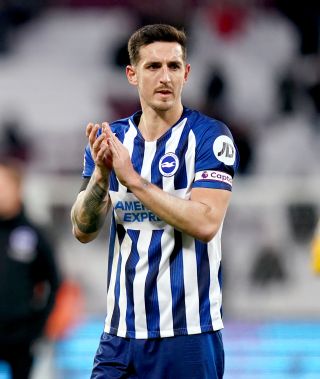 Lewis Dunk has signed a new contract at Brighton which commits him to the club for the next five years.

The 28-year-old England defender has been linked with a move away from the AMEX Stadium this summer but the Seagulls confirmed on Friday that he has agreed new terms on the south coast.

“Brighton & Hove Albion are delighted to announce that captain Lewis Dunk has signed a new five-year contract tying him to the club until the end of the 2024/25 season,” a Brighton statement read.

Dunk, who is Brighton captain and their current player of the year, was a reported target for the likes of Chelsea and Leicester in recent weeks.

He came through the ranks at Brighton and has played close to 300 times for the club across three different divisions.

“I’m delighted to have signed a new contract,” he told the club’s official website.

“The aim now is to build on a record Premier League season and help the club continue its recent progress over the next five years.”

Brighton are preparing for a fourth season in the Premier League, with Dunk having made his debut when the club were plying their trade in League One.

He has worked under five managers at the club and current head coach Graham Potter is keen for Dunk to help him take the club further up the table in the coming years.

“Since I came to the club he’s been a joy to work with and he’s a top player. We are very lucky to have him,” Potter said.

“I think his role as captain is one he’s grown into and one he will do better and better for the next few years.

“He leads by example on the pitch and he’s a good lad off it – a delight to work with.

“We’re all determined to push on next season and establish the club in the Premier League and I’m really pleased that Lewis will be with us on that journey.”