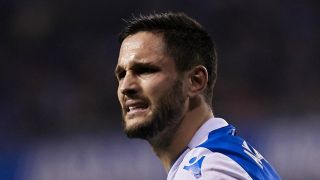 Brighton and Hove Albion have announced that a deal has been agreed to sign Florin Andone from relegated LaLiga side Deportivo La Coruna.

Andone has agreed a five-year deal at the Amex Stadium and will officially make the switch when the window for international transfers opens on June 8.

The Romania striker was linked with a switch to fellow Premier League side Burnley a year ago but stayed at Deportivo, scoring seven league goals but unable to keep his side in the Spanish top-flight.

Brighton have now moved to snap the Romania international, reportedly paying £5.25million for the 25-year-old.

"We are delighted that Florin has agreed to join us," said manager Chris Hughton. "He is a player that we have tracked for some time, and he will add a new dimension to our attacking options.

"He is a very hard-working player, and has proven his quality at the highest level in Spain, as well as at international level. I am looking forward to working with him next season."

Hughton has also signed a new contract, while Brighton also wrapped up the signing of Joseph Tomlinson from Yeovil Town on Friday, the defender set to link up with Seagulls' under-23 squad.