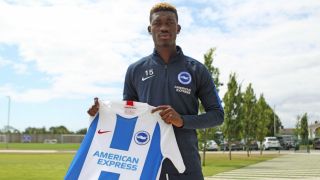 Brighton and Hove Albion continue to strengthen for the new Premier League season with the addition of Yves Bissouma from Lille for an undisclosed fee.

The Mali international has signed a five-year deal at Amex Stadium after impressing in his first two full seasons in Ligue 1.

He made 28 appearances in all competitions last term and scored three goals as Lille narrowly avoided relegation.

Seagulls boss Chris Hughton, who guided the club to 15th on their return to the top-flight, spoke excitedly of the midfielder's potential.

"We have been keen to strengthen the squad in the central midfield positions, and this will add to our options in this area," Hughton said.

"I am very much looking forward to working with him.

"He is someone with good technical ability on the ball, and has good experience at a relatively young age, after playing regularly in a competitive French league for the past two seasons."

Bissouma was part of the Mali squad that reached the final of the 2016 Africa Nations Championship final, scoring the winner in a 1-0 defeat of Ivory Coast in the last four.

The 21-year-old revealed he consulted international team-mates Bakary Soko and Molla Wague before deciding on a switch to England.

"It's the dream of every player to come and play in the Premier League," Bissouma said. "[Soko and Wague] said it's different to Ligue 1 – but you see that on the TV.

"They said it's quite physical, quite difficult but it's the best league in the world. That says it all.

"To be a big player you have to prove yourself in the big leagues and that is what pushed me a bit to come here."