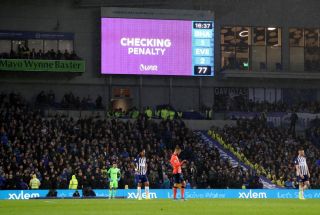 Brighton forward Aaron Connolly insists there can be no complaints about the first Premier League penalty awarded on the advice of VAR.

Connolly made a contentious piece of history during Saturday’s dramatic 3-2 win over Everton when a review at Stockley Park deemed he was fouled in the box by Toffees defender Michael Keane.

Many pundits and former players criticised the decision, but Republic of Ireland international Connolly was adamant it was correct.

“It’s a penalty. He’s trod down on my foot. He’s probably not looking at me but I think it’s a penalty and VAR thought that too,” said the 19-year-old.

“If he didn’t tread down on me I’d have got on to the ball at least, so he’s taken that chance.

“I just said to him (the referee), I think it’s a penalty. Contact in the box, it’s a penalty – whether he meant to do it or not.”

Everton boss Marco Silva complained about the inconsistency of VAR and felt aggrieved that his side, who led 2-1 after Dominic Calvert-Lewin and an Adam Webster own goal overturned Pascal Gross’ free-kick opener, were not given a penalty for Martin Montoya’s tug on Richarlison.

A series of strong spot-kick claims have been previously waved away in the top flight this season, with VAR placing a high threshold on when it intervenes.

Match of the Day host Gary Lineker was among those to question the verdict of VAR at the Amex Stadium.

“VAR hasn’t given a penalty this season, finally gives one to Brighton for next to nothing,” tweeted Lineker.

“The bar that has been at pole vault heights has descended to limbo dancing levels.”