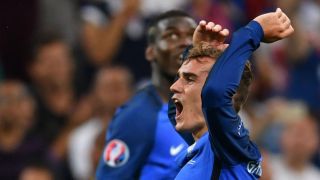 The first Euro 2016 semi-final between Wales and Portugal was all about two Real Madrid players. The second ensured there will be a fascinating battle between the best players from Real and Atletico in Paris on Sunday.

Cristiano Ronaldo won his personal duel against club-mate Gareth Bale on Wednesday but Thursday was all about Antoine Griezmann.

Not only did he score the two goals that saw off Germany, the first a penalty on the stroke of half-time after Bastian Schweinsteiger's needless handball and the second a predatory effort after Manuel Neuer flapped at a Paul Pogba cross, but he set the tone with a performance full of vibrancy and passion.

Two moments shortly after half-time encapsulated everything about Griezmann's display. First, with Germany looking to make a swift start to the second period he put in a wonderful sliding challenge to win the ball back in midfield and then, at the other end, he won a corner before urging the Stade Velodrome crowd to up the noise.

Hugo Lloris may have worn the armband, but Griezmann was France's leader.

His solo display started from the first whistle and he could have opened the scoring inside seven minutes, some lovely interplay with Blaise Matuidi creating the space but his low drive was kept out by Neuer.

Germany gradually found a foothold and started to win the midfield battle with only Griezmann offering any kind of resistance. Quick to press and clever in possession, he was fighting a one-man battle against German domination.

But lacking a centre forward with Mario Gomez injured and his replacement Thomas Muller woefully out of form, Joachim Low's men lacked any kind of penetration.

How they could have done with Griezmann.

Emre Can brought a save from Lloris, as did Schweinsteiger, but the world champions, for once, lacked conviction.

And, not for the first time in this tournament, they also lacked common sense.

Captain Schweinsteiger, making his 38th appearance at a major tournament - the most by any player - jumped with his arms in the air to defend a 45th-minute Griezmann corner, Patrice Evra flicked on and the ball struck the Manchester United man on the hand.

It was a carbon copy of Jerome Boateng's challenge on Italy's Giorgio Chiellini in Bordeaux on Saturday. The result was the same - a penalty and a goal.

Griezmann almost created a second two minutes after the restart but Olivier Giroud, perhaps the one weakness in this France team, dallied over his shot and Boateng blocked.

Germany rallied, Kimmich hit the post, Julian Draxler's free-kick whistled wide and Lloris made a stunning save to deny Kimmich but French defences were not breached.

The Stade Velodrome crowd lapped it up, an 'ole' greeting every routine pass.

Only Michel Platini - nine, in 1984 - has scored more goals at a single European Championship than Griezmann's six.

The France juggernaut rolls on. Bring on Portugal and bring on Ronaldo.