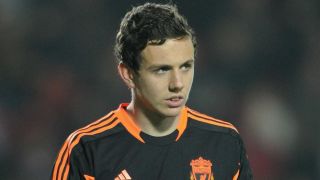 Liverpool's decision to recall goalkeeper Danny Ward from Aberdeen was an easy one to make, according to manager Jurgen Klopp.

The Wales Under-21 international has impressed in the Scottish Premiership this season, starting all 21 matches to help Derek McInnes' men to second position in the table.

Klopp has brought him back to Anfield in a move that could apply pressure to Simon Mignolet and Adam Bogdan, who have both struggled for consistency this season.

"It was an easy decision because we watched the improvement and development of Danny at Aberdeen," said the former Borussia Dortmund boss.

"It is a moment where we have to make decisions about all the players.

"Some of them are our players but on loan and, in the case of Danny, we thought it was a good idea to get him back so that is what we did."

McInnes was sad to lose first-choice goalkeeper Ward, but thanked Liverpool for allowing them to borrow the 22-year-old.

The Aberdeen boss said: "Naturally we are disappointed Liverpool FC have opted to recall Danny.

"We were very fortunate to secure Danny during the summer and we thank Liverpool for believing Pittodrie would be a good platform for him to continue his development. He has demonstrated to everyone what a capable keeper he is."

Ward himself posted a message of thanks to Aberdeen and their supporters on Twitter.

"I would just like to place on record my deepest thanks to the manager, staff, players and everyone involved at Aberdeen Football Club for giving me the opportunity to play for such a big club.

"To all the fans I cannot thank you enough for the support you have given me over my six months at Pittodrie."