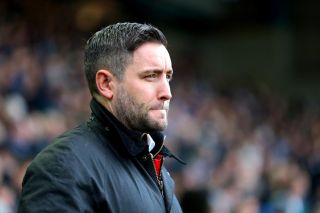 Bristol City boss Lee Johnson has told his strikers they all have a major role to play in the club’s battle for promotion.

Diedhiou and fellow forward Andreas Weimann face a fight to keep their places following the arrival of Nahki Wells.

But Johnson said: “Nahki coming in is not offensive to any of our players. They can all play with him.

“The counter-balance is good – you can have the energy of Andy and Nahki up front or you can have the big man and small man or bring Nahki off the bench for the last half-hour like we did today.

“You want the competition. The competition is healthy and I never promise any player they can play every game.

“The truth is that they’ve got to perform and hold the shirt. It should be a heavy shirt.

“But it’s not about that. We’ve got 18 or 19 players who have got to live like brothers for the last spell of the season.

“Only by doing that and actually being very chuffed for your team-mate to be the hero on a given day will we be in the right mental state to go on the sort of run we’ve been on.”

QPR have lost three of their past four games and the frustration of their fans was compounded by the sight of Wells coming on for his Robins debut just after the hour mark.

Wells scored 14 goals this season during his loan spell at Rangers, who wanted to sign him on a permanent basis but missed out when City agreed a deal to buy him from Burnley.

Rangers manager Mark Warburton admitted that he was simply not in a position to compete financially with other Championship sides.

“The best thing is to be honest with the fans,” said Warburton, who did not add to his squad on deadline day, despite Wells being among a number of players to leave.

“There’s no lack of ambition or desire to finish as high as we possibly can, but we can’t afford to go and spend £3million, £4m or £5m on players.

“What we’re doing is we’re working with our young players and there’s some really talented young boys here.

“We’ve kept our young talents and the senior players are working really hard on and off the pitch in a mentoring capacity, so I hope the genuine fans can see a lot of work being done.”

But Wells was certainly missed by Rangers, who put City under pressure in the second half as they searched in vain for an equaliser.

“We had so many chances and so much of the ball and feel very frustrated right now,” Warburton said.

“You saw the players’ effort and quality, it was just that final bit of guile. It’s about putting the ball in the back of the net.”