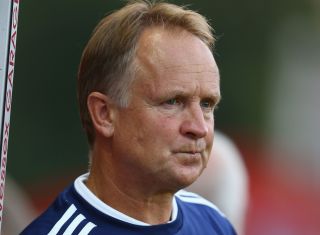 The two clubs met in their first competitive derby since 2007 for a Football League Trophy match at Ashton Gate with the home side coming out 2-1 winners.

Upon the final whistle, a section of City fans got onto the pitch and had to be separated from the travelling support by riot police.

Both managers condemned the behaviour of those involved with City boss Sean O'Driscoll saying it had "taken the shine" off their victory.

City released a statement on Thursday confirming they will be working with the police to identify those involved before handing out suitable punishment.

"Bristol City Football Club totally condemns the actions of spectators who invaded the pitch at the conclusion of last night’s game with Bristol Rovers at Ashton Gate," the statement read.

"The joy of winning the first competitive Bristol derby in six-and-a-half years should have been remembered for all the right reasons. Instead, actions from the minority of the near 18,000 crowd has thrust the club into the national media’s eye for the wrong reasons.

"This sort of behaviour is unacceptable and cannot be tolerated. We believe strongly Bristol City is a family friendly club, which is safe for supporters of all ages.

"We will be working closely with the Police and authorities, including the use of CCTV and imagery, to help identify those involved.

"Bristol City Football Club will take the strongest possible action against anyone found guilty of violent conduct – for the club, our supporters and the city of Bristol."