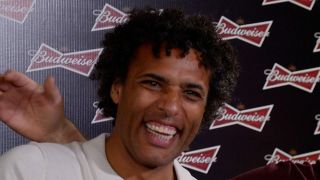 Pierre van Hooijdonk feels Celtic could win the Champions League if they were allowed to make the switch to the English league system.

English clubs rejected a proposal to incorporate Celtic and Rangers into a second tier of the Premier League back in 2009, with the division's chief executive Richard Scudamore labelling the idea "a non-starter" at the time.

But Celtic manager Ronny Deila has given his backing to the possibility of Celtic playing in a British league and Van Hooijdonk - who played at Parkhead from 1995 to 1997 - believes a switch could have a huge impact on the club's fortunes.

"I hope that it happens," Van Hooijdonk told BBC Sport. "Celtic is a club capable of taking it to another level.

"They will grow if they have the chance to join a British league. I'm sure if they had the opportunity to join the Championship tomorrow, they would do it.

"And then in five years I am positive they would be challenging for the title in the Premier League just because of the fact they are able to grow and the money that comes from the television is so much they can spend it on the right players.

"If you are challenging for the Premier League title, when you have the system where you have the four teams competing in the Champions League then they have a really good chance.

"I certainly do believe - and I said it already in the days I was playing here - if they have the opportunity to join the English league without a doubt they are going to be one of the main forces in the league."