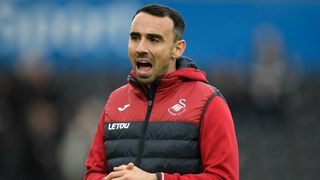 Leon Britton expects to remain in charge for Swansea City's match away to Watford on Saturday and has called for the club to urgently reinforce the squad in January.

Swans stalwart Britton took charge of the team in the wake of manager Paul Clement's departure and earned a point in a 1-1 draw at home to Crystal Palace last weekend.

But the scale of the task facing the Premier League's bottom side in attempting to avoid relegation was laid bare as they were beaten 5-0 by Liverpool.

It remains to be seen how quickly the club's owners will appoint a long-term successor to Clement, with Britton unaware of any progress behind the scenes.

"There is no change, I spoke with the chairman on Christmas Eve and that is the last conversation I have had," he said.

"We are in training on Wednesday, I don't know if I will speak to the chairman or the owners tonight or tomorrow, but as things remain I will be in charge for Watford and for training."

In a separate interview with Sky Sports, the 35-year-old, who first played for Swansea during a loan spell in 2002, expressed his concern at the team's plight.

"It's a worrying situation," he said.

"We have to keep going, whether that's myself or someone else. We have to give everything we have got because if we don't it will be a very long second half of the season.

"We need some fresh faces.

"The players have not performed as we wanted because we are where we are, so we need some fresh players to come in.

"It's always difficult to get players in when you are bottom of the league because players will always be looking at their own situation and where we are. We need fresh faces to give us a lift, everyone at the club needs a lift so it will be a big January."