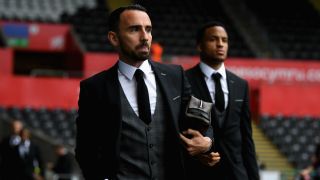 Leon Britton will take charge of Swansea City against Crystal Palace this weekend in the wake of Paul Clement's departure, the club have announced.

The Swans parted company with Clement on Wednesday after a run of four defeats in five left them bottom of the Premier League with just 12 points from 18 games.

Britton who has been with the club since 2002, took on a player-coaching role last month and has made four league appearances this season.

"The Swans stalwart has been handed the caretaker manager role while the club continues its search for a replacement for Paul Clement, who parted company with the club last night along with assistants Nigel Gibbs and Karl Halabi," said Swansea in a statement.

"Britton...will be assisted by under-23 coaches Gary Richards and Cameron Toshack. Goalkeeping coach Tony Roberts will also continue to assist."