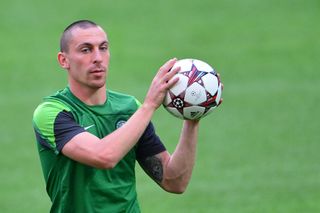 Another fruitless qualification campaign for a major tournament for the Scots comes to an end against Croatia in Glasgow, with Gordon Strachan's side scrapping to avoid the ignominy of finishing bottom in Group A.

Scotland have won two, drawn two and lost five of their nine 2014 FIFA World Cup qualifiers, with the undoubted high point being a 1-0 victory in Croatia back in March.

Strachan has been in charge since January and Brown feels the side are progressing under the former Celtic manager.

The Celtic captain said: "It's not been the best campaign overall but the last four or five results prove we are going in the right direction.

"We're already looking forward to the next campaign.

"I think we've learned a lot in the last four or five games.

"The new manager has come in and told us what formations to play, when to press, when not to press. We have learned a lot under Gordon.

"We've had an enjoyable week of training at high intensity and we're ready for the game. They still have a lot to prove. Hopefully the qualifier (against Croatia earlier this year) is in the back of their mind also."

Much has been made of Watford midfielder Ikechi Anya's arrival on the international scene after he made his Scotland debut last month in a 2-0 defeat against Belgium before featuring in the 2-1 win over Macedonia, when he scored on his first start.

Brown added: "Ikechi has been a great player to come in.

"It shows you the gaffer is working behind the scenes to bring in quality players. What he has got is pace and talent."