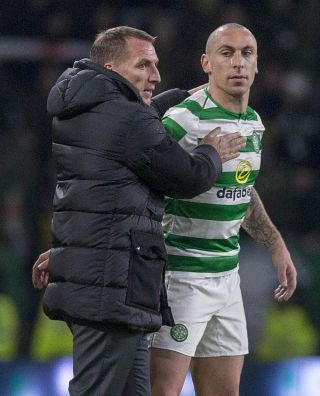 Scott Brown has hailed the Brendan Rodgers legacy that has taken Celtic from being the nearly men of Hampden to the brink of the triple treble.

The Hoops captain will look to lead his men to their third straight domestic clean sweep when they take on Hearts in the final of the William Hill Scottish Cup on Saturday.

But the veteran midfielder, who has shrugged off injury fears to insist he will be fit to face Craig Levein’s Jambos, remembers a time when the Parkhead side did not always have it their own way at the National Stadium.

Under former boss Ronny Deila, Celtic twice suffered heartache on the slopes of Mount Florida as Inverness then Rangers dumped them out at the Scottish Cup’s last four.

Before that, Neil Lennon had his own Hampden tribulations with Ross County, Gers, Kilmarnock, Hearts and St Mirren all getting the better of the Northern Irishman’s team.

But Lennon will lead out a very different Celtic side this weekend after returning as caretaker in the wake of Rodgers’ Leicester defection.

It is now three years since Hibernian became the last Scottish side apart from the Hoops to claim a domestic title but Brown believes the arrival of Rodgers that summer sparked a change in mindset that has brought on an era of domination.

Asked to think back to Hibs’ 2016 triumph over Rangers, the Celtic captain said: “I remember feeling a little bit jealous that they were in a cup final and we weren’t.

“But Brendan came in and changed our mindset.

“We didn’t have a great track record at Hampden before that but he made us realise how to change our mindset, how to improve, how to win.

“While he was here we won seven trophies on the trot. Now Neil’s here, we need to make sure we make it nine on the spin for him.

“Brendan pushed us to another level. It was great man management more than anything. He made us believe in ourselves.

“Neil’s also very good at motivating and he’ll do that before the game too.”

It may, however, not be enough to earn him the job permanently but Brown believes whatever happens Lennon has already earned the gratitude of everyone at the club.

Brown said: “It was always going to be hard when Brendan left but we’ve got a fantastic manager who as soon as Celtic called, he came right away.

🗯️ “The players are aware of what’s at the end of it. It’s important to play the game and not the occasion." #ScottishCupFinal— Celtic Football Club (@CelticFC) May 23, 2019

“The gaffer’s been phenomenal since he first came in.

“We’ll deal with (his future) after the game. If he stays the lads will love it. If he doesn’t, the lads will thank him for everything he’s done for us.

“He came in eight years ago when we needed him then and put us back on the map in terms of winning trophies. He taught everyone what it is to be a winner.

“He loves the club probably more than anyone in that dressing room.

“He’s got great ambitions. If he gets the job then it’s fantastic for everyone but if he doesn’t he’s still done fantastic since coming in. A win on Saturday would be the icing on the cake for him.”

🚍 In the event of #CelticFC winning the 2019 #ScottishCup, an open-top bus procession would be held in Glasgow after the match to celebrate the winning of the Treble Treble.— Celtic Football Club (@CelticFC) May 23, 2019

Brown will saviour victory if it comes all the more considering he almost gave the opportunity up earlier this year after holding talks with Australian outfit Western United.

“I had the opportunity to go Down Under before a last-minute change of mind,” he said. “For me it was a great change of mind because I could forgot about winning trophies in front of 60,000 fans.

“I’ve got the opportunity to pick up a treble treble now. It’s something that might never be done again and it’s something I wanted to be part of.”