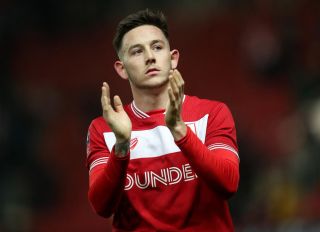 Burnley’s new signing Josh Brownhill could be included in their squad for Sunday’s home game against Arsenal.

Brownhill has joined the Clarets for an undisclosed fee from Bristol City, with striker Nahki Wells moving in the opposite direction.

Defender Phil Bardsley will return to contention following a back problem, but midfielder Johann Berg Gudmundsson (hamstring) and striker Ashley Barnes (hernia operation) are still out.

The pair were suspended for the 1-0 FA Cup win over Bournemouth but will be part of Mikel Arteta’s squad at Turf Moor, while on-loan defender Pablo Mari could make the bench after joining from Flamengo.