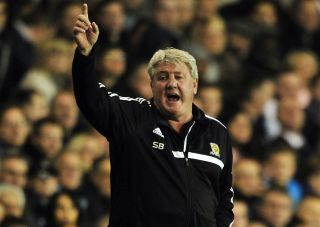 Bruce's promoted Premier League side more than matched Spurs at White Hart Lane, leading in extra-time before going down in a penalty shootout 8-7 - their second loss at Tottenham in four days after their 1-0 reverse in the league.

And the manager credited his players for their efforts, claiming the result was harsh.

"To put in another performance like this today, they didn't deserve to go out of the Cup but sometimes you need a little bit of luck and today wasn't our day," Bruce said.

"It's been a cruel couple of days and especially for Elmo," he added of Ahmed Elmohamady, who had his penalty saved in the shootout after conceding the match-winning penalty to Spurs in the league clash on Sunday.

"He had a harsh one given against him on Sunday and then he's missed the important one today.

"We certainly haven't had any luck over the last few days when we were down here but the lads have been magnificent in a fantastic cup tie.

"It was end-to-end, with both teams going at it. I can only say how proud I am to watch them.

"We certainly had the better chances, what I admired about them was that there was no fear about them at all. They're a delight to manage and I think a lot of them enjoyed White Hart Lane tonight.

"Five or six of them are determined to establish themselves as Premier League players and they're making a hell of a fist of it at the minute.

"I just hope a little bit of lady luck goes our way because over the past couple of days it's just gone against us."

Hull next appear in the Premier League on Saturday, at home to struggling Sunderland.