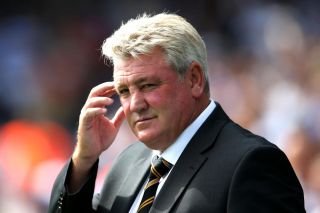 The Scottish number one scuffed a clearance on the edge of the box straight into the path of Hans Vanaken just after the hour mark, with the Belgian attacker taking full advantage to round the keeper and roll into the net.

And Bruce admitted that McGregor's error was decisive in the defeat, which leaves Hull needing a result in the second leg at home to progress.

He told BBC Radio Humberside: "It was a stupid mistake and it's cost us the match. As we've said all week playing Europe is a different kettle of fish to what we're used to on a Saturday. The teams are far more patient and the build-up's slower, and the one thing you can't make is a mistake like we did."

However, the former Sunderland and Wigan boss backed McGregor to bounce back, adding: "That's the life of a goalkeeper, he wins us the match on Saturday and unfortunately he's made an error [today].Thankfully he doesn't make too many."

Despite the result leaving Hull's hopes of advancing to the group stages of the competition in the balance, Bruce insisted there were plenty of positives to take from the game.

"We were very comfortable for an hour, missed a really big chance after five minutes and in my experience we've got to take those chances.

"We've had two chances at the end. At the end of the day we could have had a draw and gone home happy, but as it is we've got it all to do in a week's time."

Bruce also insisted he was under no illusions at how difficult it would be to turn the tie around at the KC Stadium, adding that he was impressed with the performance of the Belgian Cup winners.