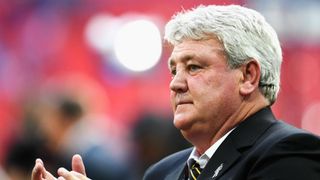 Steve Bruce says his decision to resign as Hull City manager was made "for the sake of the club".

Bruce won his second promotion as City manager in last season's Championship play-off final, but will not guide the Tigers into the Premier League having quit on Friday after his relationship with club owners Assem and Ehab Allam deteriorated.

Pre-season injuries to the likes of Allan McGregor, Moses Odubajo and captain Michael Dawson have left City with just 15 fit senior players, with Bruce recently lamenting the club's inactivity in the transfer market - thought to be a key factor in his exit.

Having previously taken City to their first FA Cup final and maiden European campaign, though, Bruce departs with happy memories.

Bruce wrote in the Hull Daily Mail: "It was with a heavy heart that I ended my time as Hull City manager on Friday. The four years I spent at the club were among the happiest times of my managerial career.

"The first promotion out of the Championship, survival in the Premier League and then the FA Cup final and European football were all fantastic times for me, my staff and my players. The relegation back to the Championship was hard to take but we all stuck together to win promotion through the play-off final at Wembley in May.

"If someone had told me the success we've had when I was appointed, I would have told them to give their head a bang. It wouldn't have seemed possible. As a group, we should all be proud of what we achieved."

He added: "My biggest regret is having to walk away but it was a decision I had to make for the sake of the club.

"The last 12 months have been very tough and it felt like the right step for the club to move forward in a different direction and with someone else in charge.

"I desperately wanted to make it work this summer and be a Premier League manager again but, sadly, it wasn't to be."

Bruce thanked his players and staff as well as City's honorary president Peter Chapman, but his open letter made no mention of the Allam family.