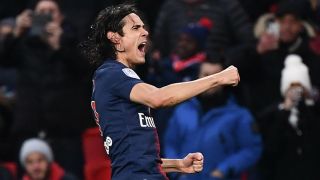 Gianluigi Buffon is confident Edinson Cavani will not leave Paris Saint-Germain in favour of a return to Napoli before the end of the season because of the Parisians' better chances in the Champions League.

Cavani spent three seasons at Napoli until joining PSG in 2013, enjoying arguably the best years of his career at the Stadio San Paolo.

Although the Uruguayan failed to reach the 20-goal mark in his first three seasons in Paris, he has been lethal ever since, netting 35 and 28 in the past two campaigns to become the club's record goalscorer.

He has nine in as many games this season but despite that form, there have often been suggestions of PSG being open to replacing him, particularly since Neymar's arrival and the clashing of the two stars' egos.

Napoli are said to be interested and Cavani is thought to be keen on a return to Naples at some point, though Buffon doubts that will happen before the end of the season.

"I often talk about Italy with him," Buffon said on Italia 1's Tiki Taka show.

"He is very close to Napoli for the love of the Neapolitan people. He is not immune [to the interest Napoli president Aurelio De Laurentiis], but I think that, at the moment, PSG gives him more of a chance to go to the end in the Champions League.

"Not that Napoli doesn't have a chance, but I think Cavani will prefer to try it with us until June."