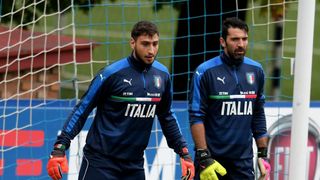 Gianluigi Buffon has backed the "extraordinary" Gianluigi Donnarumma to follow him as Italy's number one when the Juventus goalkeeper finally hangs up his gloves.

AC Milan youngster Donnarumma has firmly established himself as one of the top keepers in Europe since making his club debut in 2015.

He was linked with a move away from San Siro during the close season but eventually signed a new deal that will tie him to the Rossoneri until 2021.

And Buffon – who has 173 international caps – expects the 18-year-old to be a national team regular when the decorated incumbent decides to call time on his career.

"A goalkeeper to follow me? At the moment the most interesting is Donnarumma," the Juventus keeper told Copa90.

"At a European level he's the youngest and it's normal that there's curiosity surrounding him.

"He's a lad with extraordinary skills."

Donnarumma is not the only goalkeeper Buffon admires across Europe, though, with the 39-year-old enjoying watching many of the continent's top shot-stoppers.

"In general I appreciate all good goalkeepers," he added. "I like to see a goalkeeper making a nice gesture.

"If [Manuel] Neuer, [Thibaut] Courtois or [David] De Gea do something good I enjoy it, and I feel admiration.

"Alongside them I'd also put [Jan] Oblak, [Hugo] Lloris, [Samir] Handanovic, Alisson, [Wojciech] Szczesny, [Joe] Hart… I often watch them because I like to understand their method of making saves."