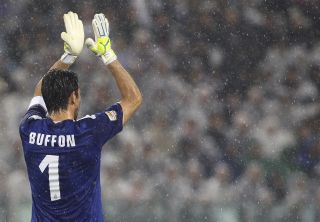 The 35-year-old, who has played for the Serie A champions since 2001, will hope to bounce back after conceding four goals in the last 25 minutes of Juve's 4-2 defeat at Fiorentina on Sunday.

It was Juve's first defeat of the season and Buffon will be keen to avoid a repeat against a Real side that are likely to feature both Gareth Bale and Cristiano Ronaldo.

Bale became the world's most expensive player after his £85.3million move from Tottenham in September, and although he has been struggling with injury, the Welshman made his return against Malaga on Saturday.

Ronaldo has been in superb form again this season, with the attacker – who cost £80million from Manchester United in 2009 – scoring five Champions League goals in his two appearances in the competition.

But though Ronaldo and Bale are likely to cause Juve problems, Buffon does not believe that Real's big-spending tactics are the best way to keep them at the top.

Buffon told Marca: "The philosophy of 10 years ago remains the same, buy great champions, entertain the fans and maintain the historic prestige of Real Madrid.

"But the reality is that in football, above all now, that's not enough to win.

"It's better to have a project, balance and patience. Money is a good starting point but it's not enough in itself."

The Italian club currently sit second in Group B in their Champions League campaign after two draws in their two matches.