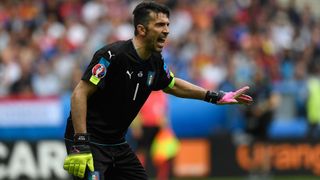 A gutted Gianluigi Buffon struggled to believe Italy bowed out of Euro 2016 despite Germany missing three penalties in the shoot-out.

Jonas Hector converted the winning spot-kick as Germany claimed a 6-5 shoot-out win after the 1-1 draw in Bordeaux on Saturday.

Simone Zaza, Graziano Pelle, Leonardo Bonucci and Matteo Darmian failed to convert for Antonio Conte's men as they were beaten in the quarter-final.

Unable to hide his emotions, a devastated Buffon rued his side's failure to make the most of their opportunity after Germany also struggled from the spot.

"Everyone has their own reasons to cry," the captain told Rai Sport.

"I'm sorry because we deserved it for the group that we are, for what we have made people believe.

"It's rare for a team to miss three penalties and then that's still not enough to win."

Bonucci had cancelled out Mesut Ozil's opener in the second half of regulation time before Italy held out to get to penalties.

Buffon was proud of his team's performance, saying: "Regrets can arrive when you feel you didn't give everything but that's not the case. We were a step away from a great feat.

"I'm sad for the fans who were always with us. We were compact and hard to beat but destiny wasn't with us this time."