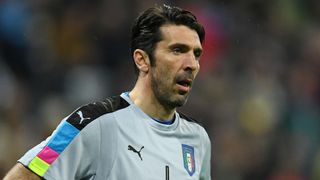 Italy number one Gianluigi Buffon has no intention of hanging up his gloves and hopes to play in a sixth World Cup at Russia 2018.

Since making his international bow in 1997, Buffon has been an ever-present for the national side at major competitions and was integral as they lifted the World Cup in 2006.

Despite his advancing years, the 38-year-old believes he can continue to perform at the highest level and has his sights set on becoming the first player to feature in six World Cups.

"For the next two years I'd like to continue playing the way I am now," he told the Corriere dello Sport.

"I'd like to play a sixth World Cup. It would be a record to go down in history. The Mexican goalkeeper Toto Carbajal and Lothar Matthaus of Germany took part in five.

"Then I'll make my considerations based on motivation, the situations and opportunities that will open up to me."

And when Buffon does eventually bow out of international competition he is confident Italy have good options to replace him.

He added: "First of all I am happy that a group of quality goalkeepers has emerged in the next generation.

"We've always had a great school of goalkeeping in Italy and it's important we see the fruits of that work.

"Other than Gianluigi Donnarumma, I could mention some youngsters like Emil Audero at Juve or Alex Meret at Udinese."