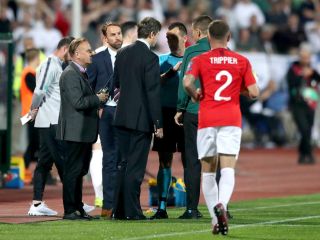 Bulgaria have been ordered to play their next competitive home game behind closed doors with a further match suspended for two years following the racist behaviour of their fans during the Euro 2020 qualifier against England on October 14.

A section of supporters at the match in Sofia’s Levski Stadium directed racial abuse at England’s black players, while some were also seen making Nazi salutes.

The Bulgarian Football Union was also fined 75,000 euros (£64,641) for “the racist behaviour of its supporters and the throwing of objects”.

Bulgaria fans in the stands at the qualifier against England on October 14 (Nick Potts/PA)The punishment, announced by UEFA on Tuesday afternoon, exceeds the standard sanction for a second offence at a home match within a period of five years, which would normally be one match behind closed doors.

The sanction means Bulgaria’s qualifier against the Czech Republic on November 17 will be played behind closed doors.

The match against England was stopped in the 28th minute and the first step of UEFA’s anti-racism protocol – a public address announcement calling on the abuse to stop – was enacted.

The abuse continued and Croatian referee Ivan Bebek halted the match again just before half-time, though it was later confirmed that this did not constitute the second step of the protocol under which the referee leads the teams from the field temporarily.

Great performance and I’m proud of the togetherness we showed in some disgraceful circumstances. Racism has no place in society or football. It needs stamping out for good. Also a massive congrats to @OfficialTM_3 on a great debut 👏 #ThreeLionspic.twitter.com/yS9pEFeXie— Harry Kane (@HKane) October 14, 2019

Monkey chanting and booing directed at England’s players and staff could still be heard during the second half, but the match was completed with England winning 6-0.

The president of the BFU, Borislav Mihaylov, resigned the following day, with UEFA president Aleksander Ceferin saying the football family had to “wage war” on racism.

The Bulgarian federation was also fined 10,000 euros (£8,619) for causing disturbance during a national anthem, while the English Football Association was fined 5,000 euros (£4,309) for the same offence.

The charge against the FA related to an insufficient number of travelling stewards will be heard on November 21 after the association requested more time to present its defence.