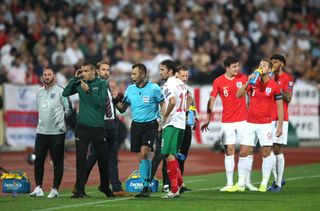 Bulgaria are expected to face sanctions from European football’s governing body UEFA over racist chanting during their Euro 2020 qualifier against England on Monday.

Monkey chanting was directed at a number of England’s black players and backroom staff during the game in Sofia.

Here, the PA news agency looks at what happens next, and what punishments UEFA has handed out for racism-related offences in the past.

What evidence will UEFA look at?

UEFA’s control, ethics and disciplinary body will consider the reports from the match referee, its match delegate and from ‘spotters’ in the crowd working for the Fare network, which works to stamp out discrimination and promote inclusion in the European game. It will also look at evidence from other sources, such as television footage and CCTV. Football Association chairman Greg Clarke said on Monday night that security staff from his organisation would gather witness statements, and UEFA would also look at these if submitted.

The UEFA control, ethics and disciplinary body must decide whether to open an investigation based on the evidence presented to it. The body may wait until after the final group of Euro 2020 qualifiers of this international break is played on Tuesday night to look at evidence, but may move faster than that.

What punishment could Bulgaria face?

Under Article 14 of UEFA’s disciplinary regulations which relate to racism, the punishment may be to order the Bulgarian Football Union to play one match behind closed doors and issue a 50,000 euros fine (which equates to just over £43,500). However, there is provision under Article 14, ‘where circumstances of the case require it’ to impose additional disciplinary measures such as ground closure for multiple matches, forfeiture of a match, points deduction or disqualification from the competition.

What sort of punishments have been issued in the past?

The three-step UEFA anti-racism protocols were launched in a resolution at UEFA Congress in London in 2013. No game has yet been abandoned under the protocol. No team at club or national team level has yet had points deducted or been disqualified over an offence of racism. One of the most severe punishments to date was the decision in July 2015 to impose a two-match stadium closure on the Croatian federation. That sanction was imposed because a Nazi swastika had been burned onto the pitch before a match against Italy in Split, which was already being played behind closed doors because of a previous offence. The Montenegrin association was ordered to play a match behind closed doors and fined 20,000 euros after its supporters were found guilty of racially abusing England players during a qualifier in March. Tottenham defender Danny Rose said he was “lost for words” at the leniency of the sanction and added: “It’s a bit shocking but there’s not much I can do now. I just hope I don’t ever have to play there again and we just have to move on now.” Players have faced more stiff punishments for racism-related offences – in August Ukrainian goalkeeper Kostyantyn Makhnovskyi, who was playing for Latvian side Ventspils, was banned for 10 matches.

It is unlikely but the pressure will be on for UEFA president Aleksander Ceferin, or another senior figure within the organisation, to issue a statement of some kind.