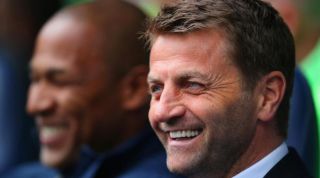 Speculation over Sherwood's long-term future at White Hart Lane has been rife ever since the 45-year-old succeeded Andre Villas-Boas as head coach in December, with reports frequently suggesting Tottenham will look to bring in a new boss at the end of the season.

The club look set to miss out on a top-four finish in the English top-flight and exited the UEFA Europa League in March courtesy of a last-16 defeat to Benfica.

Yet Sherwood has drawn attention to his current Premier League win ratio of 57 per cent, which is better than any of his predecessors.

"The record's good – it is better than any Premier League manager in the history of this club," said Sherwood, who has taken charge of 17 league games.

"There has been no one at this club who has done a better job at the Premier League. My record stands for itself."

Sherwood believes there is no need for Tottenham to replace him, suggesting only someone with a "magic wand" could have done more to help the team this season.

"It was never the brief when I came into the club that we had to finish in fourth place," he added. "What was said to me was: 'Can we make the team a little bit more attractive and score more goals?' I think I've ticked that box.

"When I took over I told the chairman (Daniel Levy) this would be a very difficult task to finish in the top four with the squad of players you've got.

"So I was very upfront and honest with him. And I was still put in the position and just tried to do the best I can.

"It looks like the top four has been a bridge too far unfortunately. I don't know if someone else could do better. If someone comes in with a magic wand perhaps. The only way for someone to do better is you need time with it.

"It's important for the club, and for any club, to know what they want and not to just get anyone as they are the biggest name who can appease the fans for 10 minutes.

"Those guys still get the sack wherever they go so it's about getting the right man for the right job and the right fit."