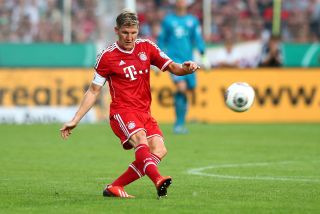 The defending champions have conceded just one goal in the process of beating Borussia Monchengladbach, Eintracht Frankfurt and Nuremberg.

Pep Guardiola's men are included in a group of four teams who boast 100 per cent records, but Schweinsteiger insists that there is more to come from Bayern.

Last season's treble winners needed goals from Franck Ribery and Arjen Robben in the 69th and 78th minutes to come out on top against Bavarian neighbours Nuremberg - a game Schweinsteiger admits was frustrating at times.

"I knew Nuremberg would basically defend in their own half," he said.

"We could certainly have scored a goal or two much earlier.

"We had to be a little bit patient, and we were. But we always stayed on the attack.

"Everyone saw that we shifted up a gear in the second half, and then we scored the vital opening goal. We know we can play even better, but that'll come."

Bayern were able to name Ribery in their starting line-up for the win over Nuremberg, despite suffering an ankle injury against Frankfurt, while Mario Gotze made his competitive debut for the club.

However, they will be without Thiago Alcantara for at least seven weeks after the Spanish midfielder tore ankle ligaments in Saturday's game at the Allianz Arena.

Bayern did not concede against Freiburg in the Bundesliga last season, winning 2-0 at the Mage Solar Stadion in November before taking three points at home thanks to an Emre Can goal.

Despite finishing fifth last season and qualifying for the UEFA Europa League, Christian Streich's men have endured a tough start to their league campaign this time around and are yet to record a win.

However, once they have taken on Guardiola's men on Tuesday, Freiburg will have faced three of the current top-four sides.

While striker Sebastian Freis is in good form, having scored two of Freiburg's five goals this season, the visitors' leaky defence will be a cause for concern going into the clash.

Having conceded eight goals in three games, Freiburg will need to be on their mettle to keep Bayern's front-line at bay.