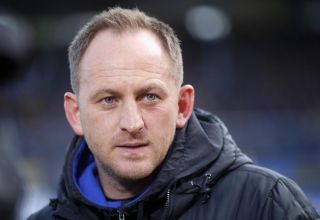 Torsten Lieberknecht's men had looked all-but certain to return to the German second tier but have enjoyed a turnaround in fortunes since the new year.

Braunschweig have lost just once in their last six games, taking points off Borussia Monchengladbach, Mainz and most recently Bayer Leverkusen in the process.

Their recent success has given them a fighting chance of beating the drop and they will fancy their chances against a Hannover side desperate to stop the rot after three straight league defeats.

Losses against Borussia Dortmund, Hoffenheim and Werder Bremen have kept them in touching distance of their relegation rivals, with both sides likely to be affected by results elsewhere at the bottom on Friday and Saturday.

Braunschweig are able to move 16th with a win while Hannover could be dragged further into the relegation mire, with 17th-place Hamburg contesting the first fixture of the weekend that affects the relegation mix-up.

Mirko Slomka's charges host fourth-place Bayer Leverkusen at the Imtech Arena on Friday while Stuttgart can move within two points of Freiburg with a victory over Christian Streich's men.

Freiburg have been the form side of late at the bottom of the Bundesliga, taking 10 points from their last possible 15 while they also leapfrogged Nuremberg last week thanks to a 3-2 win at the Mage Solar Stadion.

Nuremberg will likely have their work cut out when they host Borussia Monchengladbach but can count on the hot streak of Swiss striker Josip Drmic, who has shouldered much of their goalscoring burden in recent weeks.

The 21-year-old has five goals to his name from the last four outings, helping him rub shoulders with the likes of Mario Mandzukic, Robert Lewandowski and Adrian Ramos at the top of the scoring charts.

After a positive start to his reign at Stuttgart, Huub Stevens' honeymoon period is well and truly over and he will be keen to bolster hopes of keeping the club in the Bundesliga when they welcome Freiburg.

European hopefuls Wolfsburg can take advantage of any potential slip-ups from Monchengladbach and Leverkusen when they travel to Borussia Dortmund - with the home side eager to wrap up second place amid pressure from Schalke.

The weekend's final game sees Hoffenheim and Hertha Berlin meet in the capital with neither side having much to play for in mid-table.