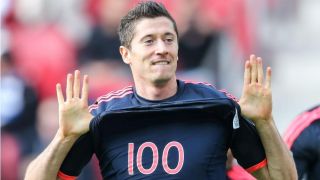 Kingsley Coman was also on target for Pep Guardiola's side, who have now made it seven wins from as many Bundesliga fixtures – their best ever start to a league campaign.

The  Poland striker then made it 10 for the season 12 minutes later, tucking in after latching onto Arturo Vidal's incisive pass, before former Juventus youngster Coman tapped in his second Bayern goal to cap the win.

Borussia Monchengladbach interim boss Andre Schubert boosted his chances of securing the job on a permanent basis by leading the side to a second-straight win, as they beat lowly Stuttgart 3-1.

Schubert took charge following the resignation of Lucien Favre, and guided Monchengladbach to their first points of the season with a win over Augsburg in midweek.

And Monchengladbach maintained that form at Stuttgart, with goals from Granit Xhaka and Raffael – either side of with a Christian Gentner own-goal – sealing a comfortable day for the visitors.

Kevin Kampl netted his maiden Bayer Leverkusen goal as they overcame Werder Bremen 3-0, while Wolfsburg recovered from their heavy defeat to Bayern with a 1-1 home draw against Hannover.

Elsewhere, Kevin Volland scored a brace as Hoffenheim saw-off Augsburg to claim their first league win of the season, and Schalke won 1-0 at Hamburg to extend their winning streak to four matches.