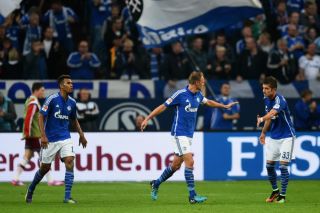 Robert Lewandowski opened his Bayern account to put the visitors ahead with a well-worked strike.

Pep Guardiola's side typically dominated the ball, but Sidney Sam's free-kick midway through the second half caused chaos in the Bayern box, deflecting off Howedes and into the net.

Replays suggested the ball went in off the Germany defender's arm, but referee Marco Fritz waved away furious Bayern protests.

The result halts Schalke's run of seven consecutive defeats to Bayern, although they remain without a win this season.

Bayern have lacked a clinical side to their game since switching to Guardiola's now-favoured 3-4-3 system, and an inability to break down their opponents will have done little to soothe any nervy fans.

The champions, who handed a debut to Xabi Alonso in the centre of defence, were made to work for their opening-day win over Wolfsburg last week, but rushed out of the blocks within the opening six minutes in Gelsenkirchen.

Philipp Lahm's ball over the top found Lewandowski, who squared to Thomas Muller, only for the striker's first-time shot to be tipped over the bar by goalkeeper Ralf Fahrmann, who was also forced into producing a smart save to keep out Mario Gotze's low drive.

However, Fahrmann was powerless to prevent the visitors taking a well-deserved lead on the 10-minute mark.

A neat one-two involving Sebastian Rode released Lewandowski inside the penalty area, leaving the Polish striker with a simple finish from close range.

Pep Guardiola's side were the only team with a better home record than Schalke last season, but there appeared to be little sign of any advantage for the hosts, who struggled to deal with a controlled first-half performance from Bayern.

It took 27 minutes for Schalke to muster their first attempt, Sam sending a swerving shot just wide from 30 yards.

Manuel Neuer was nearly caught out five minutes before the break, sending a clearance straight to Kaan Ayhan after rushing out of his area, but the teenage midfielder's audacious 45-yard lob went wide.

Schalke showed more urgency within the opening 10 minutes of the second half.

And Bayern's defence was finally breached two minutes after the hour mark, when Sam's teasing delivery pinballed around the penalty area before Alonso's clearance cannoned off Howedes and into the net.

Bayern could not channel their frustrations into a winner, with Keller visibly delighted at the final whistle with a result that is likely to dispel any doubts about his job security at Schalke.