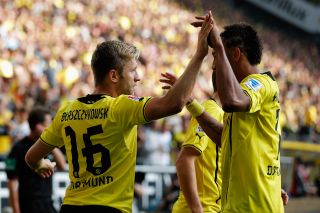 Dortmund retained their place at the top of the table with a 5-0 thumping against 10-man Freiburg at Signal-Iduna Park.

Marco Reus was the instigator for the victory, scoring twice in the 10 minutes before half-time for Jurgen Klopp's men.

Reus opened the scoring with a 35th-minute tap in, and Dortmund – who dominated the first half – went to the break with a two-goal lead following Reus' penalty, which was given after Fallou Diagne was handed a straight red card for fouling Robert Lewandowski.

The Poland international got in on the act after half-time, beating two men before dinking over Freiburg goalkeeper Oliver Baumann in the 58th minute.

And there was still time for Lewandowski to score another before Jakub Blaszczykowski sealed the points with 11 minutes to play.

Bayern were made to work harder for their scrappy 1-0 home win over Wolfsburg as they extended their winning record at the Allianz Arena to 12 Bundesliga matches.

Wolfsburg sat back and soaked up Bayern pressure in the first half, with Arjen Robben guilty of wasting a terrific chance from six yards just before the break.

The visitors spurned a glorious opportunity to take a shock lead around the half-hour mark as Marcel Schafer headed Christian Trasch's cross over the bar.

And Bayern made them pay in the 63rd minute as Thomas Muller met Franck Ribery's excellent ball at the far post and produced a smart finish from the angle.

Both Dortmund and Bayern have accrued 19 points from their seven league matches, with six wins and one draw, while Leverkusen are only one point behind them following their latest triumph.

Sami Hyypia's side beat Hannover 2-0 at the BayArena thanks to first-half goals from Sebastian Rolfes and Sidney Sam.

Roberto Firmino and David Abraham scored in the second half for Hoffenheim as they came from two goals down to draw 3-3 with Schalke, while Sami Allagui netted twice as Hertha Berlin beat Mainz 3-1 and Marcell Jansen's late equaliser saw Hamburg claim a 2-2 draw at Eintracht Frankfurt.