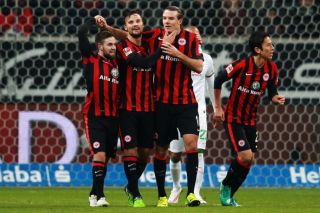 A tight first period ended all square, with Alexander Meier putting the hosts ahead only for Theodor Gebre Selassie to level with a close-range header on the stroke of half-time.

However, the home fans at Commerzbank Arena then had plenty to shout about after the interval as Haris Seferovic, the in-form Meier and Stefan Aigner put their side in control.

Luca Caldirova pulled one back after 79 minutes but Marc Stendera quickly responded with a fine strike to ensure there was no way back for the visitors.

Meier's brace means he has now scored four times in the last three games and he also reached double figures for the season.

That result left Werder Bremen second-bottom of the table as Hamburg had earlier secured a 2-1 success against Mainz at Imtech Arena.

Shinji Okazaki set up a tense finish when netting in the 89th minute, but the Japan striker and Yunus Malli missed chances to equalise in stoppage time.