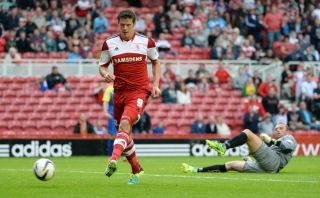 The 25-year-old forward, who has already represented eight clubs during his professional career, arrives at Turf Moor for an undisclosed fee and has signed a three-year deal.

Jutkiewicz was loaned out to Bolton Wanderers for the second half of last season and went on to score seven goals in 20 Championship appearances.

Burnley manager Sean Dyche said: "I still think there is development in Lukas; he's 25 and has been around a little bit now and he finished last season very strongly.

"I feel there is even more to come and he'll be hungry for that. He'll be working with a good group who are all hungry to not only achieve things but to keep pushing themselves as individuals.

"He's a physical presence who can hold the ball up very well and link play. We think there is goals in him and it is very similar to the Sam Vokes story where he's always done well and we're looking for him to build on what he's done.

"There is a nice demand now in that area of the pitch as all the players offer something different to the team so we're happy with how that is developing."

Burnley, who finished as runners-up to Leicester City in the Championship last term, begin life back in the Premier League with a glamour home game against Chelsea on August 18.