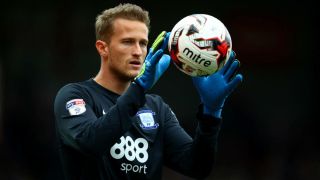 Burnley have completed the signing of goalkeeper Anders Lindegaard on a deal until the end of the season following injury to first-choice Tom Heaton.

Heaton suffered a dislocated shoulder during Burnley's recent 1-0 win over Crystal Palace and has been ruled out for about four months, meaning he is unlikely to return before the end of the year.

Lindegaard, who had been training with the club for a little over a week, joins on a free transfer until the end of the campaign after leaving Preston North End.

The former Manchester United player will compete with Pope and Adam Legzdins, as Burnley look to continue their promising start to the Premier League season, with Dyche's men seventh after five games.

Lindegaard told the club's official website: "I am here to try and sharpen up the competition in the goalkeepers' department and we'll see what happens down the line.

"I've had a good week here and I've had a very good impression of the whole club and all the people here. It's not hard to fit in nicely here.

"I feel good physically and I still want to play. I come here with a good spirit and I have a lot of enthusiasm for getting started."