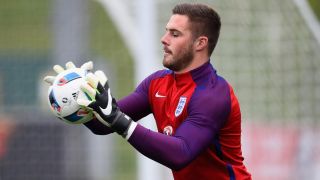 Stoke City goalkeeper Jack Butland is keen to stake his claim for an England place after returning to action from a broken ankle.

Butland appeared set for a place in his country's Euro 2016 squad but suffered the injury during the Three Lions' 3-2 friendly win over Germany in March.

England's first-choice goalkeeper Joe Hart came under scrutiny following a pair of dreadful errors during a disappointing campaign in France and Butland, who played the first half of Stoke's opening pre-season friendly at Burton Albion on Saturday, is determined to put himself in the frame for international recognition once more.

"Unfortunately that didn't come about but if I keep playing well for Stoke, with clean sheets and good performances, it will give me that opportunity again.

"If that opportunity comes then I plan on taking it."

After months of diligent work alongside Stoke's medical staff, the 23-year-old conceded his outing at the Pirelli Stadium was as much a psychological as a physical barrier to negotiate.

"I'm really pleased to be back and get some minutes under my belt again," he explained.

"From a mental point-of-view, the last time I was on the pitch I broke my ankle – so it was good to get through that.

"To feel what it's like to be back on the pitch again is really good."