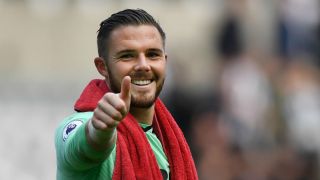 Hart has been first choice with the national team since their exit at the 2010 World Cup, taking over from Robert Green.

He has featured in all but 12 of England's internationals since then, despite a dip in form that saw him sent on loan to Torino by Manchester City boss Pep Guardiola last season.

The 30-year-old has been loaned out to West Ham for the 2017-18 Premier League campaign, but has come under scrutiny following some questionable performances.

In his six league outings Hart has conceded 13 goals as the Hammers have struggled, Slaven Bilic's side finding themselves in the bottom three ahead of this weekend's clash with Swansea City.

Hughes expects Hart to remain Southgate's first option in goal for the matches with Slovenia and Lithuania, but says Butland will be ready should the England boss have a change of heart.

"If Gareth was thinking of making a decision my view would be that he's the natural keeper to go with," said Hughes.

"But given that Joe has picked up the two previous qualifiers it sends the message to everybody that the likelihood is Joe, who is a very accomplished keeper as well, is more likely to keep his place.

"But if Jack is called upon he'll be ready both physically and mentally."

An England win over Slovenia at Wembley on October 5 will secure their place at Russia 2018.