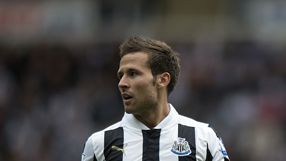 The Frenchman arrived at St. James’ Park last summer and is expected to line-up for Alan Pardew’s side when they take on Bordeaux on Thursday night.

The midfielder helped his former club to a domestic double before moving to Newcastle and he believes the Ligue 1 sides experience in the tournament paved the way to success.

"With Lille, we played for three or four years in the Europa League, and I think that competition helped us to win the French title and the French cup," said Cabaye.

"It's important to play 100% in this competition to get more experience for the future.

"Now we have got the Europa League, so we have to play to win the game because we are playing at home.

"I knew before I came here that Newcastle was and is still a big club in England, but last season we worked really hard every game to try to play in a European competition.

"We wanted the Champions League, but this season it's the Europa League and it's really important to play properly in this competition.

"The Europa League will give much experience to all the players, especially the young players, so we have to be focused on the game tomorrow to win the game, and try to keep working to win every game and to play for the top of the league."