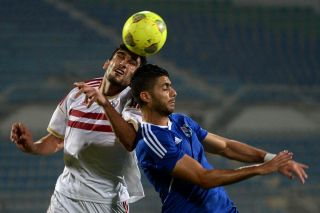 AS Vita, TP Mazembe, CS Sfaxien and Entente Setif are through to the semi-finals with one match left to play.

However, Zamalek have lodged a complaint with CAF against DR Congo outfit AS Vita Club over the dual identity of Rwandan striker Taddy Etekiama that could see them back in the race for a semi-final spot.

If their 1-0 home defeat to AS Vita on match day 5 is reversed by CAF, the Egyptian giants could qualify for the last four with a victory when they travel to Sudan to play bottom of the group Al Hilal.

Not only do the Egyptians need CAF to decide in their favour, other results to go their way and then secure a first away win in the group stages of the competition, but Zamalek need to do so while the club is in turmoil following an assassination attempt on chairman Mortada Mansour by the club's own fans.

The assassination attempt comes as the relationship between Zamalek management and their hardcore supporters known as "Ultras White Knights" has been deteriorating for weeks over several issues, including the recent sacking of former coach Mido.

In early August, the fans also stormed the club’s headquarters and vandalised the chairman's office, shortly after he had criticised their attitude in a press conference.

"Ultras White Knights is not a football fan group but a terrorist organisation," Mansour told the media after the latest incident.

"They tried to kill me and two people were injured."

Zamalek board member Ahmed Mortada was also horrified by the attack and vowed to end the football club's association with the supporters' group.

"We won't deal with Ultras again. White Knights no longer have a relationship with Zamalek," Mortada said.

"We will consider only the club's respectable fans. Any member of the club who will be dealing with the Ultras – his membership will be deactivated."

The other Group A game this weekend sees a derby between the two Democratic Republic of Congo highfliers, AS Vita and TP Mazembe, to determine who will likely top the group.

Their clash takes on even more significance with the threat of Zamalek's appeal hanging over AS Vita ensuring they will be looking for three points to make absolutely sure of progression to the semis.

In Group B, there's an all-Tunisian derby on Saturday as fierce rivals Entente Setif travel to CS Sfaxien with a one-point lead in the standings to determine who will top the group. Al Ahly Benghazi travel to Esperance with only pride at stake.